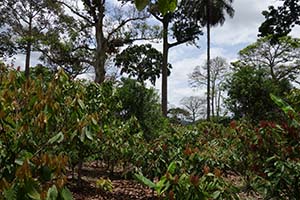 SoCa project considers soil and carbon sequestration for its multiple benefits to Society. Soils may constitute a major carbon (C) sink due to plant photosynthesis and the subsequent transfer of C to soils by living and dead organic matter (OM). Managing the soil functions that affect the potential for C sequestration could support both climate change mitigation and adaptation, and a sustainable plant productivity for global food security. This is in line with the 4 per 1000 initiative, Soils for food security and climate. The potential of soil to sequester C depends on many factors such as climate and soil type, land‐use and management, soil biotic activities, operating across scales in time and space.

At the same time, farmers need to adopt the identified practices and this calls for more research on multiscale governing mechanisms. Unfortunately, research often limits efforts to C cycle alone. As C cycle clearly depends on nutrient availability, especially nitrogen (N) and phosphorus (P), a greater understanding of C storage and dynamics in soil will be successful only if CNP couplings are considered. Secondly, the fate of organic matter in soil is regulated by soil organisms whose functional diversity also depends on agricultural practices. Such data are currently lacking for tropical farming systems while it may have important implications for global strategies for soil C sequestration to restore soil fertility and to help with climate change mitigation and adaptation.

The SoCa project will consider smallholder agricultural systems of the sub‐Saharan Africa (SSA), ranging from annual staple crops association to complex agroforestry systems, as good candidates for C sequestration. In addition, studied sites are along a climatic gradient to tackle the adaptation issue.

The first step of the project will target situating the C sequestration issue within a shared understanding across actors and countries. A diagnosis analysis of soil C storage, nutrient (N, P) dynamics and greenhouse gas (GHG) emissions will be realized taking advantage on the consortium members’ expertise. These results along with collected information on socio‐economic environments and performances of agricultural systems will complete the database of the CaSA network in which several partners are already involved.

Cameroon: Diversified cacao‐based agroforestry systems, along a climate gradient from Bokito to Ngomedzap;

Madagascar: From mixed cereal‐legume to intercropping with trees; along a climate gradient from the Malagasy Highlands (Itasy and Analamanga regions) through Moramanga to Atsinanana on the Eastern coast.